Anticipating the future of real estate in the Riyadh city, it will be a demand and target for housing and investment, and to activate the responsibility, and share their interests and aspirations in line with the objectives of Vision 2030, and to open new horizons in real estate products that are available to all in line with their desires, framework and needs, The group exclusively sponsors the “Real Estate Roadmap 2030” initiative, in cooperation with the National Center for Social Responsibility and the Ministry of Housing.

The initiative aims to enable and present real estate plans and solutions for real estate companies and real estate developers to receive the population increase in 2030 in the city of Riyadh, and how to manage residential complexes, develop land and provide real estate solutions and products that contribute to accommodating this number of residents, especially after the assurances of His Highness, Crown Prince Muhammad bin Salman predicted that the city of Riyadh will have a population of 16 to 20 million by 2030. 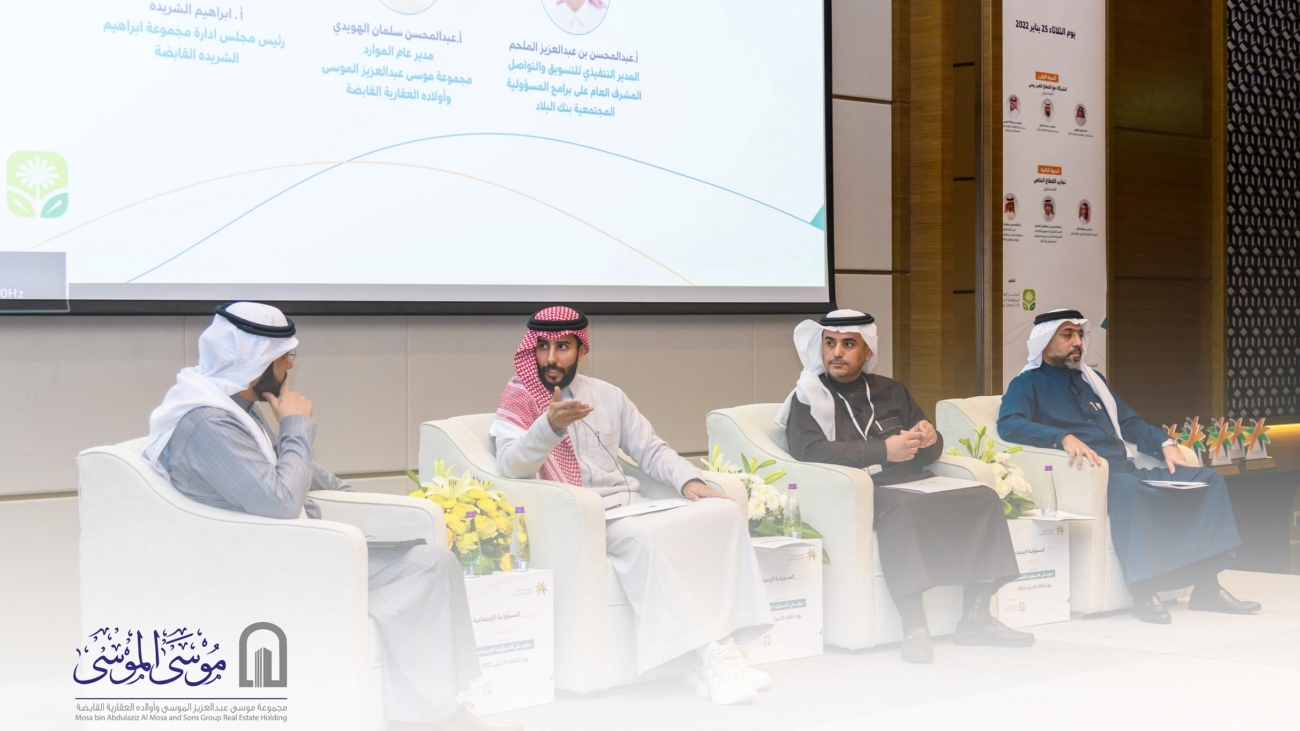 Mosa bin Abdulaziz Al-Mousa and Sons Real Estate Holding Group participated in the dialogue symposium inaugurated by the Director General of the Branch of the Ministry of Human Resources and Social Development in Riyadh, Dr. Mohammed bin Abdullah Al-Harbi, and organized by the Department of Social Responsibility in the branch under the title “Experiments in Social Responsibility”, with the participation of the National Center for Social Responsibility and a group of important personalities and experts in the private and non-profit sectors.

The Director of the Human Resources Department was a. Abdul-Mohsen bin Salman Al-Huwaidi represented the group in the second dialogue session, which was entitled “Experiences of the private sector”, through which Al-Huwaidi reviewed the group’s strategy in social responsibility and a number of the group’s experiences in this field, indicating the extent of its importance as it is an essential pillar of building society and noting the importance of such These meetings aim to bridge the relations between the three sectors of the state, integrate with all parties, and benefit from their experiences.

At the end of the symposium, Dr. Al-Harbi honored Mosa Al-Mosa Group for its efforts in the field of social responsibility and the services it provides to the community. 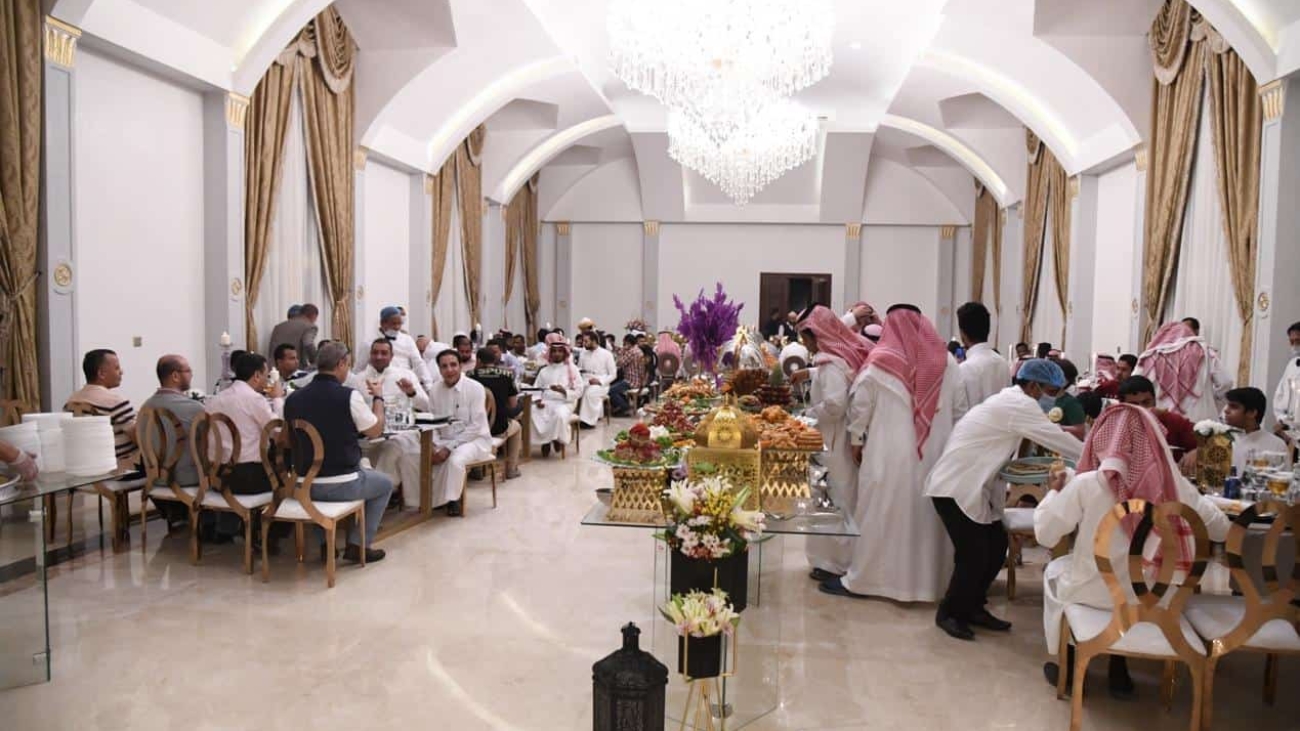 Mosa bin Abdul-Aziz Al-Mosa and Sons Real Estate Group organized its annual Iftar for its employees, which came within the framework of the group’s keenness to enhance the spirit of communication among its employees as one family that seizes the blessed month in achieving a symbiotic and mutually supportive humanitarian message.
For his part, the Chairman of the Board of Directors of Mosa bin Abdul-Aziz Al-Mosa and Sons Real Estate Group, affirmed that organizing the annual Iftar party is an occasion to confirm the bonds of interconnectedness between all employees of the group, which always strives to maintain its working structure united, coherent, and harmonious. He pointed out that such occasions, in addition to being of noble religious value and message, support the bonds of brotherhood and love among the group’s members, and that is what is taken care of, especially in such blessed days in which we live in a spiritual atmosphere that transcends and elevates souls. 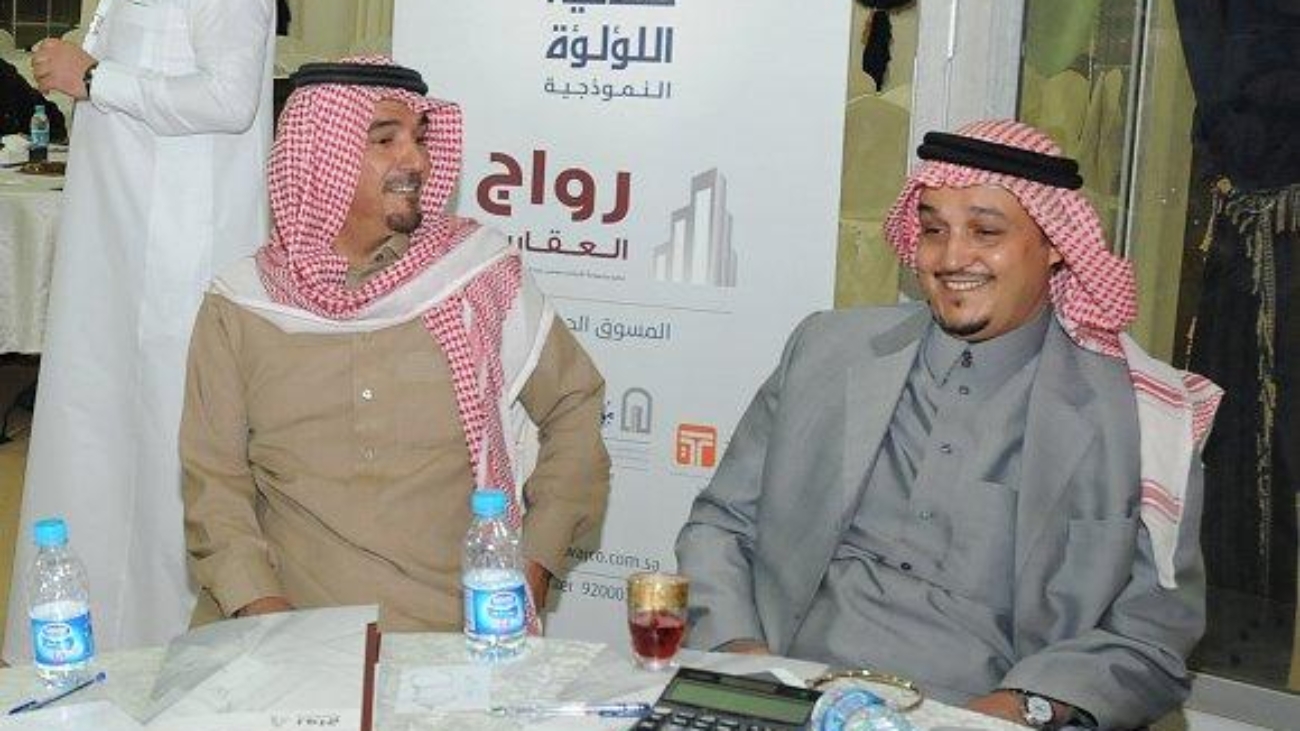 The public auction of Pearl Industrial blocks project, carried out by Mosa Al-Mosa Real Estate and Investment Group, achieved a great success amid the competition of many investors in the industrial field who want to implement these exemplary and unique industrial projects in the local market, that emulate the most prominent projects in the region. It achieved a great success in meeting the desires of major investors to invest in this giant project, which was fully marketed in less than two hours, as the project was sold at 100%…

The Chairman of the Board of Directors of Mosa bin Abdul-Aziz Al-Mousa Group praised the great turnout of investors and the influx of many of them from outside the Kingdom, and the competition for investment in this distinguished project, which achieved a very high rate of workshop reservation, stressing that the company’s projects, praise be to God, achieved great competitive rates due to their quality and strategic locations that keep pace with the developments of the present and foresee the future with a broad design and investment horizon in all areas that meet the aspirations for quality projects that achieve strategic gains for the beneficiaries, indicating that the project is a unique model.

Shaikh Mosa bin Abdul-Aziz Al-Mosa affirmed that the group is working on expanding industrial projects and designing them appropriately, as is the case in the model Pearl Industrial Center, which is characterized by its nearness to the main roads and the availability of supportive attraction elements for investors, represented in the presence of buildings for singles, and shops for spare parts and services, and the accuracy of design and its luxury. He added that the project is the most prominent and important in the Riyadh region, which has achieved a great demand since its announcement, and has attracted a high percentage of well-known and recognized investors with specialization in this field. 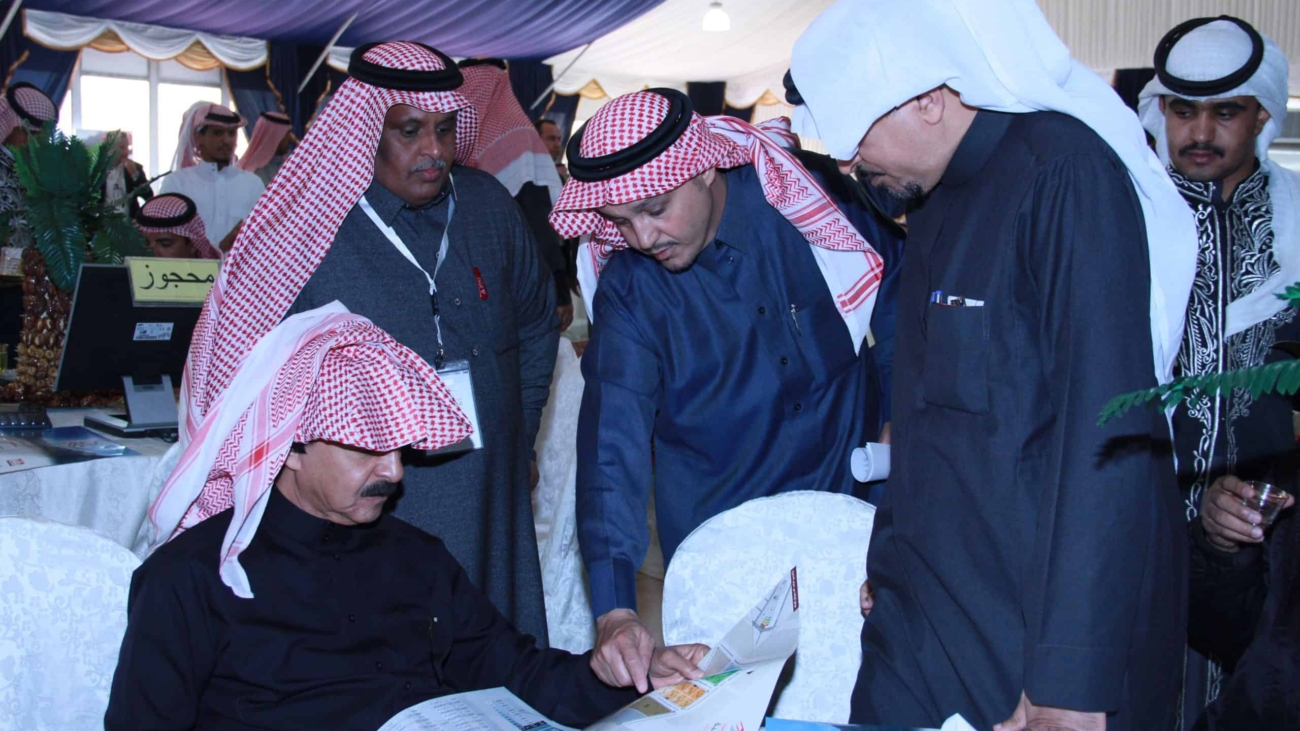 Al-Mosa logistics warehouses’ auction achieved an obvious success, which was evident through the number of attendees and their specializations in the areas targeted by the plan and the record time at which the auction was concluded (within less than 80 minutes from the start of the auction), which was interspersed with Al-Maghrib prayer.
The auction, organized by Rawaj Real Estate Company, a member of Mosa Abdul-Aziz Al-Mosa and Sons Group and the exclusive marketer of warehouses, was held in the presence of industrialists, investors and interested in the real estate sector, especially since the scheme is located in an area full of industrial activity because it is close to the second industrial city in addition to its location on the most important axial roads leading to inside and outside Riyadh, close to the extension of Al-Kharj Road and at the intersection of Al-Yaqout and Port Said Roads.
This success comes as an extension of the contributions of Mosa bin Abdul-Aziz Al-Mosa and Sons Group, the owner and developer of the scheme, in real estate development and the provision of real estate products of all kinds (residential, commercial and industrial) to the local market. The idea of the project comes from the need for diversity in service projects in strategic locations that meet the market requirements.
Due to the record speed with which all land plots and ready-made warehouses and others that are still under construction were sold, the auction has been classified as one of the best auctions that have been held recently, especially in the aspect of logistics services schemes, which target special segments of customers who are interested in owning warehouses that supply their factories and their industrial and investment activities.
The Rawaj Real Estate Company clarified during the auction that a large number of those warehouses entered into investment, as they were leased for the benefit of the auctioneer, and this confirms the importance of the warehouse location and professional development… Then the auction moved to offering land plots, some of which have warehouses built on them and others could obtain building permits for them immediately.
Shaikh Mosa bin Abdul-Aziz Al-Mosa, Chairman of Mosa Abdul-Aziz Al-Mosa and Sons Group, said after the conclusion of the auction: We thank God Almighty for his bounty, generous giving and conciliation, which was shown by the high turnout for the auction, which reflected the strategy of the schemed location near Al-Kharj Road and many of the economic roads axes in Riyadh and its nearness to industrial cities and the junction of highways such as the southern and eastern ring roads.
Al-Mosa emphasized that the turnout reflects the urgent need for logistics services schemes in the region, and this is another indication that real estate and industrial investment activities and what is related to them are witnessing an increasing effectiveness driven by the strength of the Saudi economy, which the government of the Custodian of the Two Holy Mosques continues to support with all its capabilities.
Al-Mosa said: Al-Mousa logistics warehouse area is the natural extension of industrial cities in Riyadh and warehouse projects with such an organization, and these distinct requirements that were applied in its establishment by Tlad Construction Company, one of the group companies, are considered pioneering by all standards and reflect our project ambition in pioneering this field and our desire to contribute to meeting the current deficit of Warehouses.
Al-Mosa pointed out that Nofudh Company, which is also one of the group’s companies, is managing warehouses and providing all maintenance work and security requirements for them .. All these factors contribute to giving the group elements of strength and distinction to possess the great amount of confidence reflected in the success of today’s auction. 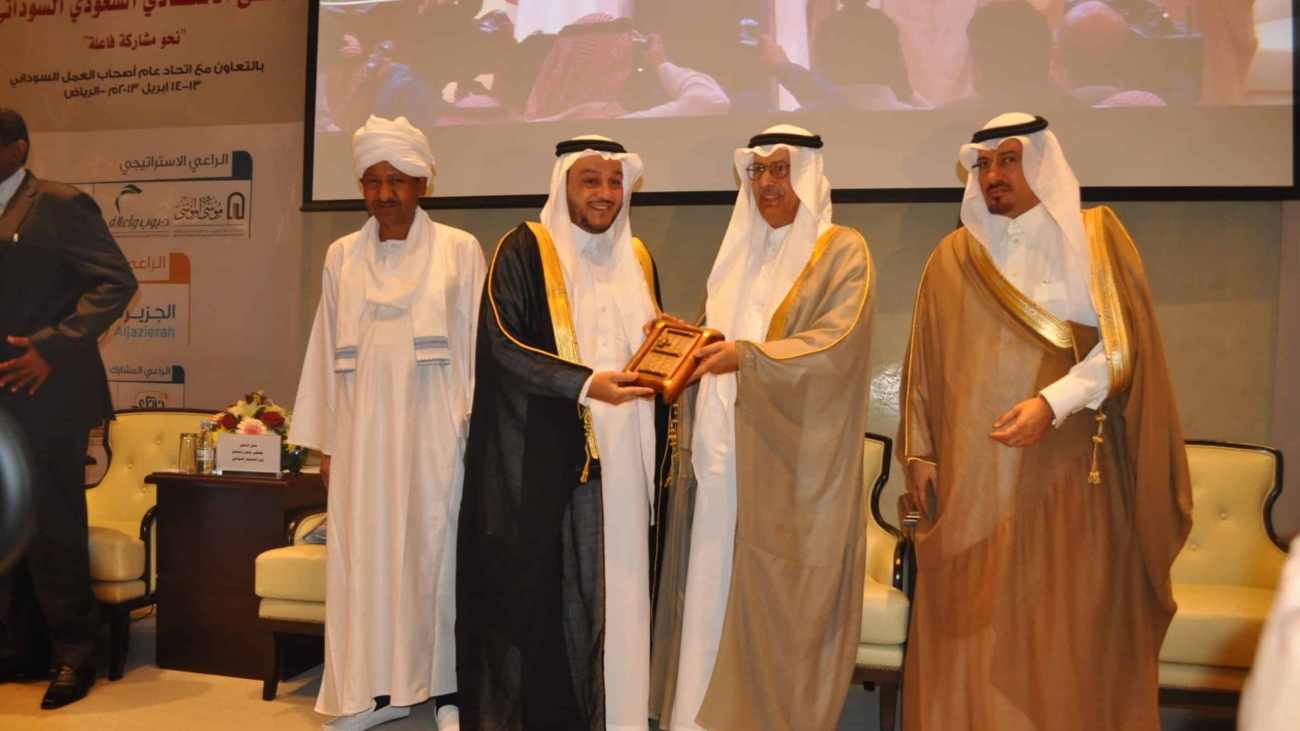 Mosa bin Abdul-Aziz Al-Mosa Real Estate Holding Group has participated in the Saudi-Sudanese Economic Forum as a strategic sponsor, which was organized by the Council of Saudi Chambers on April 13 and 14, 2013, in the capital Riyadh, in cooperation with the General Union of Sudanese Employers and with the wide participation of representatives of the public and private sectors in the two countries.
While the Secretary General of the Council of Saudi Chambers, Eng. Khalid Al-Otaibi, indicated that the forum comes within the framework of strengthening and activating economic relations in its commercial and investment sides between the Kingdom and Sudan, as the forum is one of the recommendations of the Saudi-Sudanese Joint Committee in its last session. Stressing that the forum aims to clarify the components and investment opportunities available in Sudan, and to discuss aspects of the existing and expected partnership between the business sectors in the two countries, in addition to working on overcoming the obstacles facing some Saudi investors in the sisterly Republic of Sudan.

Al-Otaibi pointed out that the forum represents one of the mechanisms that the two sides rely on in pushing trade and investment relations between the two countries to further progress and prosperity in the coming years, pointing to the efforts of the Saudi-Sudanese Business Council, which is chaired by the Saudi side, Shaikh Saleh Kamel, and its role in developing these relations to a wider space that meets the aspirations of the business sectors in both the Kingdom and Sudan and serves the common interests of the two brotherly countries and peoples.
It is expected that the sessions of the forum will address investment and trade opportunities available in Sudan and the general policies related to that, along with a presentation of Saudi investment experiences in Sudan. In addition to workshops, an exhibition and meetings between Saudi and Sudanese businessmen to introduce the projects available in Sudan.
It should be noted that the volume of trade exchange between the Kingdom and Sudan amounted to 3.42 billion riyals in 2011. While livestock (sheep, goats, cows, and camels) are the Kingdom’s most important imports from Sudan, the most important commodities that the Kingdom exports to Sudan include chemical, plastic and paper materials. 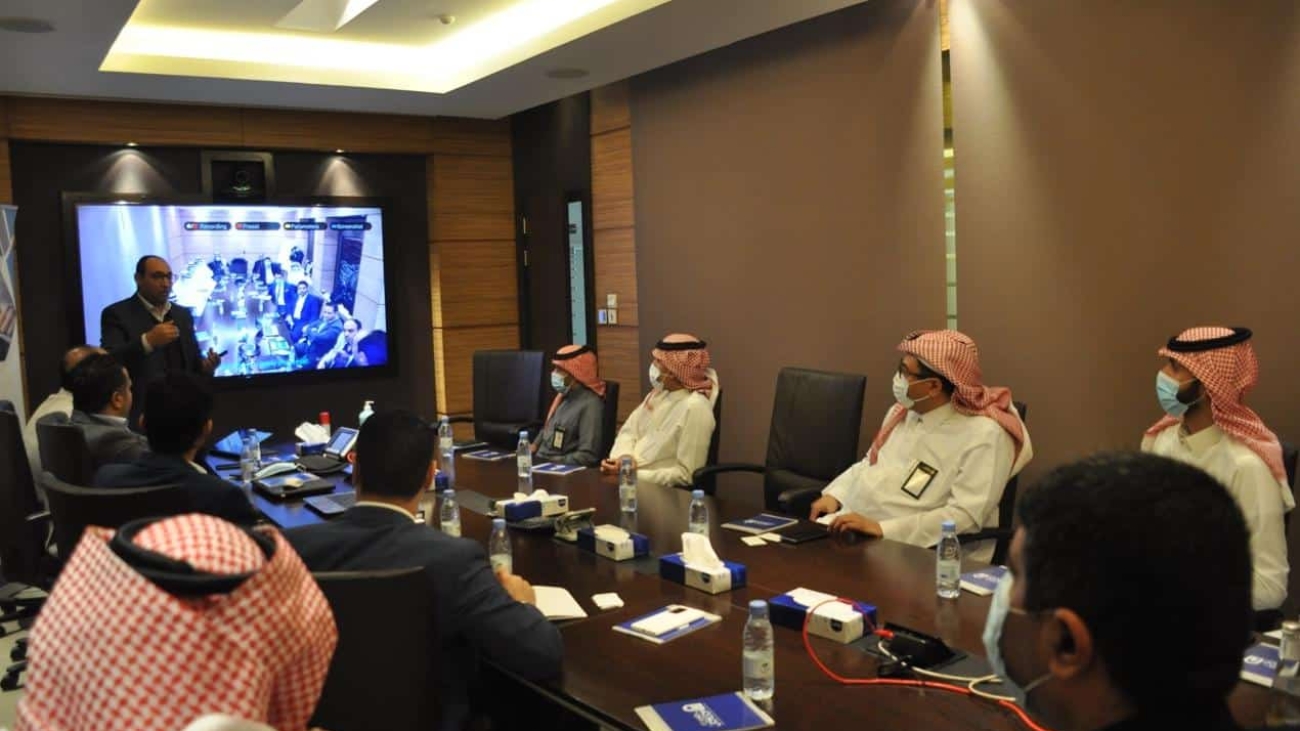 Within the plans of Mosa Bin Abdul-Aziz Al-Mosa and Sons Real Estate Holding Group, to keep pace with digital transformation and digitization of business, which is one of the goals of the Kingdom’s Vision for 2030, the group signed a contract for the supply and installation of the Microsoft Dynamics 365 Enterprise Resource Planning System, which is one of the best, most intelligent and flexible global technology solutions, in cooperation with “The First System” company for information technology, in order to cover all the operations of the businesses and departments of the group, with the aim of benefiting from innovative services and solutions that would move the group to advanced stages in its digital journey.

The signing ceremony was attended by the executives and directors of departments at Musa bin Abdul-Aziz Al-Mosa and Sons Real Estate Holding Group.